Research to improve safety and effectiveness of stroke drugs 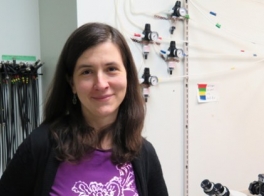 Sometimes it’s hard to understand how basic research can improve the lives of people living with stroke. Most people think of recovery in terms of the big picture, while scientists like Dr. Bojana Stefanovic are focused on microscopic neurons and individual blood vessels.

But spend time with the CPSR Investigator, an electrical and biomedical engineer who completed post-doctoral studies at the U.S. National Institutes of Health, and it becomes clear that stroke recovery is in the detail.

Her lab at Sunnybrook Health Sciences Centre targets the brain region surrounding the stroke because the “current thinking is the brain’s capacity to recover depends on this surrounding region,” explains Dr. Stefanovic.

It is believed that neurons around the damage can jump to the rescue and take over some of the function that’s lost when neighboring tissue is killed by stroke.

To understand this, Dr. Stefanovic is studying the intricate architecture and function of the networks of tiny vessels that feed the neurons around the stroke.

Her research involves the use of magnetic resonance imaging (MRI) to measure brain activity and to study blood flow in the penumbra.

In an effort to make cells around the stroke “perkier” and more likely to snap into action, the Stefanovic lab is also testing different combinations of drugs in rodents. For example, they are studying one drug that acts on the neurons and another that makes vessels more reactive, improving the way brain cells fire and function. Rodents are studied for weeks and months following stroke to understand changes in neurons, blood vessels and behaviour.

“What we are trying to do is get at the mechanism that makes these drugs work,” Dr. Stefanovic says. By understanding the underlying processes, “we get drugs that are safer and more effective.”

In the end, that’s the big picture.

© Copyright 2018 Canadian Partnership for Stroke Recovery. All rights reserved.
™The heart and / Icon on its own and the heart and / Icon followed by another icon or words are trademarks of the Heart and Stroke Foundation of Canada used under license.