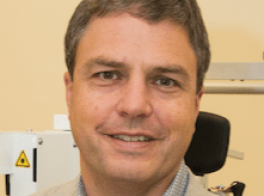 In Calgary, robots are on the frontline of stroke rehabilitation.

At the Foothills Medical Centre and Alberta Children’s Hospital, these $300,000-plus machines precisely measure how patients are able to move, control and perceive of their stroke-affected limbs.

“What robotics do on the assessment side is bring accuracy, precision and repeatability in order for us to measure things,” says Dr. Sean Dukelow, the Heart and Stroke Foundation Canadian Partnership for Stroke Recovery’s Calgary research leader and a physician who specializes in rehabilitation medicine. “They detect subtle changes” and enable researchers to develop targeted rehabilitation plans.

But these aren’t like the robotic characters in a Star Wars film. A stroke rehab robot looks like a sophisticated chair attached to a high-tech arcade game: Your arms are strapped to horizontal plates that move back and forth and side to side and you are looking onto a tabletop that projects images to hit and flick away.

All the while, a computer measures and draws the fine details of your every movement.

“We can measure the patient’s perception of where their limbs are in space, their speed, control, direction of movement,” Dr. Dukelow says. “We can see if they have a tremor we need to work on, identify discrete elements of sensation and visual-spatial skills. There is an eye-tracker that can tell if their eyes move to a certain area but their limb doesn’t.”

The Calgary robots were designed and built by B-KIN Technologies of Kingston, ON, a tech company that grew out of Queen’s University neuroscience research. There are only 18 of the robots in use in rehab centres and hospitals in Canada, the United States and Japan.

A new $330,000 robot, designed for use with children, was recently installed at Alberta Children’s Hospital (ACH) for children as young as age five with perinatal stroke (a stroke just before or after birth).

For the kids, “playing in the robot” is fun. So far, 50 children with perinatal stroke and 150 healthy children have received a robotic assessment. “We are going to continue on our work in assessment in kids, taking what we’ve learned in the adults and applying it to children,” Dr. Dukelow says.

“Behavioural assessments in the robot are being linked back to structures in the brain that are damaged as a result of the stroke,” he says, so that therapy can be tailored to ensure the greatest gains are achieved.

In addition, the use of brain stimulation during robotic therapy is being used to help prime the brain to rewire and reorganize.

The Dukelow team has been gathering data and insight from robotic assessments since 2005 and their findings are helping to improve therapy for patients across the country and inform research across the Canadian Partnership for Stroke Recovery (CPSR).

Dr. Dukelow says Calgary’s involvement in the CPSR “is important because, fundamentally, our stroke research team here believes in the importance of clinical trials in recovery and this is a way of linking us with other like-minded sites in Canada.”

“It has become readily apparent if you are going to run clinical trials and improve the efficacy of something they have to be multi-site and need people to be able to cooperate to test really important ideas in areas like robotics, stem cells, and brain stimulation.”

© Copyright 2018 Canadian Partnership for Stroke Recovery. All rights reserved.
™The heart and / Icon on its own and the heart and / Icon followed by another icon or words are trademarks of the Heart and Stroke Foundation of Canada used under license.